What Are Ice Cream Cakes Made Of? 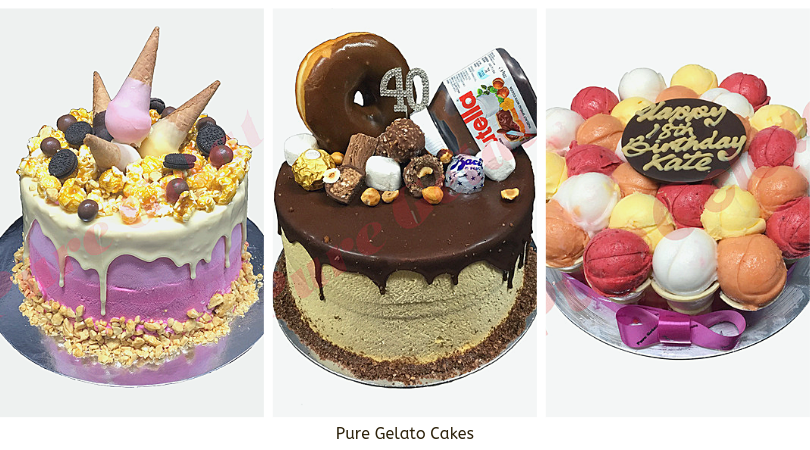 Ice cream cakes consist of between 10 percent and 16 percent butterfat. Ice cream is very high in fat content due to the amount of butter and cream used, however due to the high-fat content and large volume of air that is churned when making the ice cream, while it is freezing this generates a great level of creaminess. This high amounts of fat and air is what distinguishes ice cream cakes from gelato cakes. Additionally, when ice cream is labelled as frozen dessert, this entails that the ice cream has been made with vegetable oil and it technically not ice cream. This type of ice cream ‘frozen dessert’ is not ideal for ice cream cakes.

Gelato has a strong and vibrant flavour and is served slightly warmer than frozen comparable to soft serve ice cream. Italian gelato is denser than ice cream since it is less airy due to the slow churning when making gelato. As a rich, dairy based dessert with less fat than ice cream, Pure Gelato gelato cakes are made entirely of different layered gelato with fresh fruit, nut butter and herbs. Typically served at a slightly higher temperature than ice cream which creates a thicker and smoother texture.

You may have noticed, many cakes and desserts have a common base, whether it be a sponge cake base with a specific flavour added to it. Ice cream cakes and gelato cakes have a dairy milk base. At Pure Gelato, we don’t believe in bases. Why should everything be the same? There’s a reason we offer over 150 gelato flavours with a massive range of different ingredients and flavours. We mix fresh fruit with natural fruit sugar to produce a soft and organic frozen dessert with no base. We push the boundaries of frozen dessert, making gelato cakes entirely from a range of different natural flavours which you an choose from. Check out our Flavour List with over 150 different natural flavours. If you have special nutritional requires, you can also view our Nutritional Chart to find a delicious flavour that caters for your nutritional requirements.

Forget about ice cream cakes and its high fat contents, indulge in gelato cakes guilt free! With our range of vegan, preservatives free, dairy free, sugar free and gluten free flavours which have been sweetened with natural fruit sugar. Ice cream cakes don’t have to be unhealthy when you have gelato cakes. Shop online or visit our Sydney Pure Gelato store.

We look forward to sharing gelato with you!